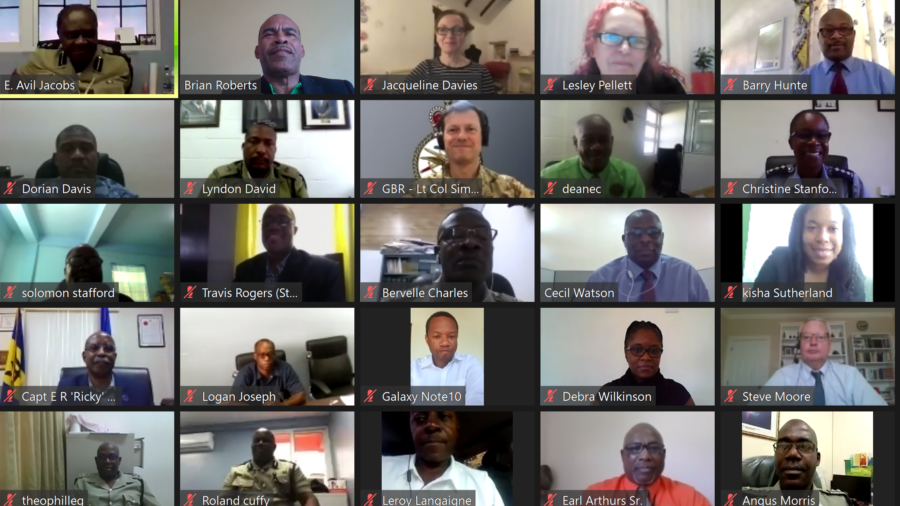 Participants of the Building Integrity for Senior Leadership course which was hosted by the Regional Security System Training Institute, in collaboration with the United Kingdom Defence Academy. (Photo: RSS)

A good leader must have, among other qualities, personal integrity, and this may be the most critical facet of their character.

This was the view of Executive Director of the Regional Security System (RSS), Captain (N) Errington Shurland, as he delivered an address at a closing ceremony for the Building Integrity for Senior Leadership course which was hosted by the RSS Training Institute, in collaboration with the United Kingdom Defence Academy, for 34 law enforcement officials from across RSS Member States.

Captain Shurland said that while many great leaders have said “integrity is doing the right thing when no one is looking”, he believes that two important components of integrity are adherence to a moral or ethical principle and pursuit of an undiminished state or condition.

He added that integrity required persons to look within themselves and forego self-righteous declaration.

“Everyone makes mistakes, so being a person of integrity doesn’t mean you haven’t committed a moral or ethical violation ever. What it means though, is having the strength of character to learn from those misbehaviours and to seek continual self-improvement…

“So before we can even embrace the notion of integrity, we need to develop the ability to logically wrestle with the urge to rationalise our underlying faults and related consequences,” the RSS head asserted.

Captain Shurland declared that his integrity today is as a result of valuable lessons learnt and noted that it was necessary for a leader of any organization to set the tone for others.

These sentiments were also shared by the Director of Policing and Risk Management at the RSS, Major Kerry Waterman, during his remarks.

Emphasising that while it was the responsibility of leaders to ensure that staff within their organisations upheld its values, Major Waterman pointed out that the onus was also on them to set the right example.

He maintained that leaders must sustain the highest standards of professionalism and uphold the ethics and standards that are required from subordinates and colleagues.

“As the Director of Policing and Risk Management, I work closely with the Director of Training in the designing of the policing standards. It is important that when the RSS deploys in whatever capacity, from humanitarian assistance, disaster response to peace-keeping missions, that our troops are aware of the standards expected of them, and are trained and given the tools to do such,” Major Waterman stated.

The two-day programme focused on topics such as Strategy; Public Financial Management; Fraud and Risk Management and Corruption Risks in Complex Security Environments.