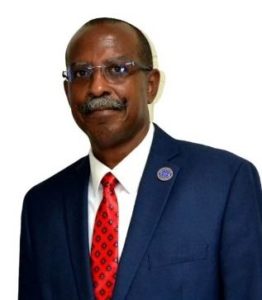 Cyber security, border security and food security within the Caribbean region have been highlighted as three areas which pose significant vulnerabilities during a crisis such as the current COVID-19 pandemic.

This was the view of Executive Director of the Regional Security System (RSS), Captain (N) Errington Shurland, as he delivered his presentation at the first Virtual Security Conference in the Caribbean Community which was hosted by the CARICOM Implementation Agency for Crime and Security (CARICOM IMPACS).

Captain Shurland stated that COVID-19 presented new challenges to addressing the already existing transnational crimes such as the illegal trafficking of drugs and firearms and the rising level of violence.

“The pandemic has definitely brought into stark reality the multi-dimensional nature of security challenges confronting our region… Individually they threaten the well-being of CARICOM countries but together they threaten our very existence,” he asserted.

The RSS official indicated that with the recent surge in remote business operations and information and communications technology (ICT), there has been a rise in cybercrime, with evidence showing a 350 per cent increase in the phishing of websites.

Stressing the need for cyber security providers to shift their focus to building a resilient cyber domain, Captain Shurland stated: “I would suggest, strongly so, that consideration be given to signing on to the Budapest Convention; it is the first international treaty seeking to address internet and computer crime by harmonizing national laws, improving investigative techniques and increasing cooperation.”

He further noted that countries in the region must be more agile in creating or updating national cyber security strategies.

The Executive Director also highlighted the importance of border security coordination, noting that the operational challenges which border security agencies had faced in the first stages of the COVID-19 outbreak highlighted the need to “step-up” assistance on health related issues, including crisis management and contingency planning.

Captain Shurland posited that: “Just as transnational organized crime does not stop at borders similarly the coronavirus does not.  The importance of Border Security coordination and cooperation is even more critical as a consequence of COVID-19, and evidence suggests that there is a need for a better Border Management System at the national level that is fully integrated.”

The RSS head maintained that “an overarching regional response mechanism that includes the development of plans for biological, chemical, radiological and even nuclear hazards, at the intermediate and national response levels, must be considered.”

With regards to food security, Captain Shurland underscored its connection to national security.  He explained that due to a catastrophic decline in revenues and insufficient access to concessional financing, countries may be unable to import food, which would lead to food shortages and could potentially spearhead civil unrest.

“The onset of COVID-19 has underscored for our region, and indeed the global community, the need to establish effective and meaningful collaborative mechanisms to anticipate global risks and threats… What is critical for us not only as a region, but as a global community, is to focus on information sharing… I believe that multilateralism is critical in wrestling COVID-19 to the ground,” he opined.