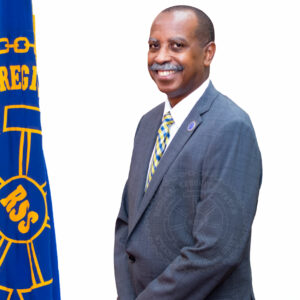 Commodore (Cdre) Errington Ricardo Shurland was appointed Executive Director of the Regional Security System by the Council of Ministers on 1 February 2017. He also serves as the Chief of Staff of the Barbados Defence Force and comes to the position with over thirty-four years (34) of military service. During his career in the military Cdre Shurland served in several operational and administrative posts. He has also served as Barbados’ alternate representative at the Organisation of American States and Chief of Delegation at the Inter American Defence Board.

Cdre Shurland is a graduate of the Britannia Royal Naval College in Dartmouth, United Kingdom and the Command and General Staff College of the United States Army, Fort Leavenworth, Kansas, United States of America. He holds a Master’s degree in Maritime Administration from the World Maritime University in Malmo, Sweden. Cdre Shurland is a Justice of the Peace in Barbados and his military honours include the Queen’s Jubilee Medal, the Governor-General’s Medal of Honour, the Services Medal of Honour, the General Service Medal and two Defence Board Commendations.

He has also served as Barbados’ delegate to the United Nations and the International Maritime Organisation. He was an adviser to the Barbados delegations, negotiating the Maritime Boundaries and Fisheries Agreements with Guyana and Trinidad and Tobago. Additionally, he has served on a number of national committees including Port Security Committee, Standing Committee on Coastal Hazards, National Maritime Inter- Agency Committee, National Hydrographic Committee and the Maritime Training Committee at the Samuel Jackman Prescod Polytechnic.

Cdre Shurland is a regionalist at heart and remains positively committed through collaboration with regional and international partners to developing policies and strategies to counter current and emerging threats to the stability of the sub-region. The key to sustained economic growth and development is a safe and secure environment and this is vital for the public good of the sub-region.