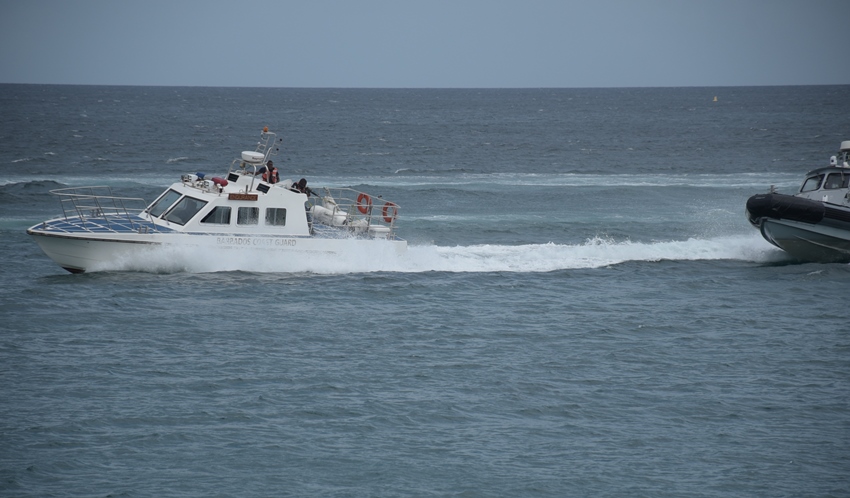 To mark the Day of the Seafarer and the International Day against Drug Abuse and Illicit Trafficking, the RSS and BCGS hosted a number of demonstrations at the BCGS PELICAN, including a drug interdiction simulation. (Photo courtesy BDF)

The contribution made by seafarers to international trade and the economy was lauded during a celebration held at the Barbados Coast Guard Ship (BCGS) PELICAN, on Sunday.

The activities, hosted by the Regional Security System (RSS) and the Barbados Coast Guard, were held to observe the Day of the Seafarer and the International Day against Drug Abuse and Illicit Trafficking.

During a brief opening ceremony, Deputy Director of the RSS, Graham Archer, paid homage to fishers, researchers, ship operators and all other occupations which operated in the maritime space, praising them for their continued efforts in spite of the several factors which affected their duties.

Mr. Archer alluded to shipping in particular and noted that it had been negatively impacted in recent times. “In this current environment, we can see the effects of shipping on our economies. We know that there are shortages of items because shipping has been affected by COVID-19 and the war in Europe. You can tell by the prices in the supermarket which have gone up, shipping has become more costly. I say all that to drive home the major contribution that shipping makes to the economy,” he stated.

Affirming the RSS’ commitment to the development of the maritime space, the RSS Deputy stated: “At the RSS we try to contribute to the sustenance of the maritime environment by providing training for people who operate ships. We do a whole range of maritime courses… so that we can have a better maritime community to serve everyone in the region.”

Chief Fisheries Officer, in the Ministry of  Joyce Leslie, also commended persons who worked in the maritime sector, in particular those in the fishing industry, pointing out that it was one of the most dangerous occupations in the world.

“The vulnerable nature of fisheries, that includes not only the aquatic biological resources but also the harvest sector and the people who work on the ships, the fishers, are susceptible to a lot of threats, not only to their livelihood but also their security when they’re on the sea. Consequently, the Fishing Division is grateful for the continued exposure and enhancement of our staff through the many training exercises and interventions conducted by the RSS over the past years,” she maintained.

Ms. Leslie said that the Fisheries Division had been metaphorically joined at the RSS’ hip since its inception, and noted that “the issues associated with, and emanating from, illegal and unregulated fishing within the region and the deleterious impact it can have on our fishing resources can only be combatted through a regional initiative using the resources of the RSS.”

During the two-hour activity, visitors to the BCGS PELICAN saw a net-throwing demonstration by fisherman Selwyn Bowen, search and rescue and drug-interdiction simulations, and a presentation on how to handle an emergency at sea by fishermen Everton and Donville Brathwaite.