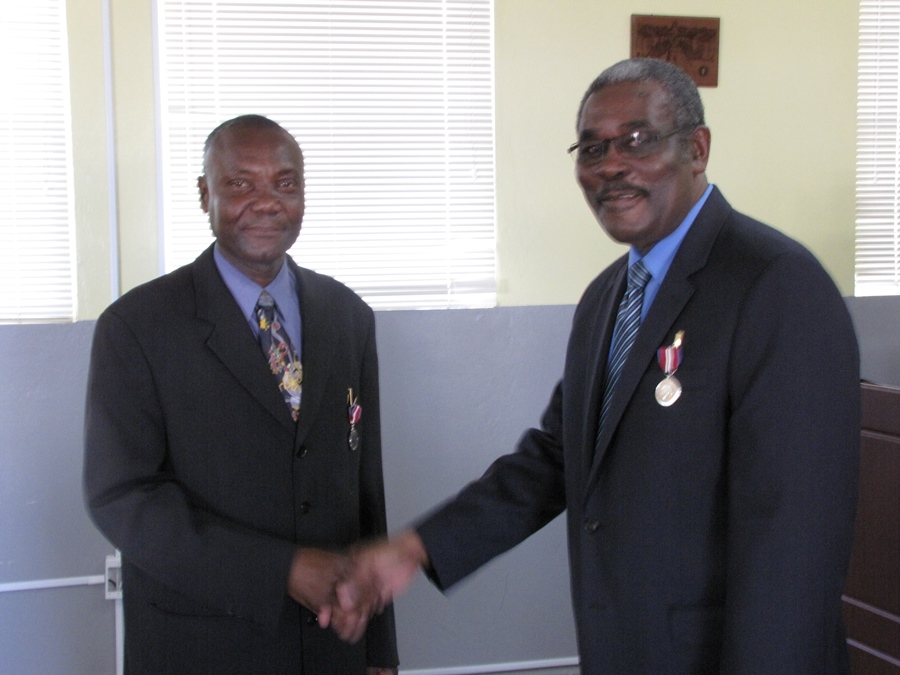 Former Storeman / Driver of the RSS, the late Vermont Jordan was presented with the Queen’s Award by former Executive Director of the RSS, Grantley Watson. (Photo: RSS)

I recognise the presence of the family of the Late Vermont DaCosta Jordan, the Hon Colin Jordan, Minister of Labour, The Executive Director of the Regional Security System – Capt (N) Errington Shurland and other staff of the RSS, members of the Barbados Defence Force.

Mr. Vermont DaCosta Jordan, better known to us as “Perka Jordan”, a former member of the Barbados Defence Force, joined the Regional Security System Headquarters on 1st April 1998 as a Storeman\Driver.   He performed various other duties until he ended his employment on 30th June 2020, serving a period of approximately 22 years.

Jordan, performed his duties in a professional and enthusiastic manner and he was always punctual for any of his details.  He took pride in his appearance.  He was always immaculately dressed especially when he was detailed to take the Executive Director to a meeting or to collect the Commissioners of Police when they were visiting from the other RSS Member States.

He was a very jovial person who was the life of any function in the Headquarters and through the years he developed many friendships both locally and overseas.   As part of his duties, he was detailed on many occasions to collect personnel from the other RSS Member States whether they were arriving on attachment, to attend a meeting or to attend a training course.   You could guarantee that by the time “Perka” left the Airport and reached the office at the back of the airport he had made a friend.  He always tried to make those persons from the Member States feel at home and would go out of his way on many occasions to ensure that their needs were met.  I am sure that if his name is called in any RSS Member State, there is some police officer out there who would recognize him.

He was very helpful to the staff and rarely said no when they called on him for assistance.   In addition, he always looked after “his girls” in the office.  From time to time he would bring them ready peeled sugar cane, ready peeled golden apples or mangoes, dunks, plums, sandwiches or snacks.  He would lay these out on a platter, stick some toothpicks in mangoes, golden apples or sandwiches and walk around the office and share them out.

In 2001, he was transferred to the post of Attendant where he looked after the RSS lunch room and he approached this position with just as much enthusiasm.   He often gave the staff the impression that he had prepared the meals himself.  The meals were prepared by the Barbados Defence Force but he always tried to enhance the presentation by adding some type of dish, even if he had one of the Attendants prepare it and make the staff believe he had prepared it himself. His favourite meal on Fridays was souse and you can guarantee that you will get more pepper than you get souse.

In the lunchroom, he always tried to entertain the staff and he would always have an audience.  Jordan could tell a story.  He took pride in being the first person to know about everything. He would read the Nation Newspaper from cover to cover and then he would google the other Caribbean newspapers and talk about them too. However, when he was telling his stories, he somehow put a spin on the content in such a way that they were more elaborate and exciting than what they really were and we were often left to question “Is this story true or where did he make up that one?”  This earned him another title “the Black Newspaper”.

He was well versed in current affairs and could discuss any topic but somehow, he seemed to had a special liking for politics and almost every lunch break there were some very heated discussions between himself and ASP Tyrone White and whoever else choose to join in.  At the end of the discussion and he felt he had won, he would always do some kind of dance as his sign of victory.   He was not much of a singer but at times, he would sing and perform to some of those old-time Pentecostal hymns for some of his audience.   The lunchroom was his stage.

On 25 November 2014, he received the Queen Elizabeth Diamond Jubilee Medal in recognition of his 25 years combined honourable service to her Majesty and his country.  The Diamond Jubilee medal was created in commemoration of the 60th anniversary of Her Majesty’s Ascension to the throne on the 6th day of February 1952.

He had a special relationship with Brigadier Sir Rudyard Lewis, former Chief of Staff and Regional Security Coordinator, who was like a father to him.  Even after the Brigadier retired from active duty, they both maintained that relationship.

Overall, Mr. Jordan was liked by the staff and those he came into contact with from the RSS Member States, he was considered by some of them as an ambassador of the RSS Headquarters.  He enjoyed life and lived it to its fullest.  He made a great contribution to the success and development of the Regional Security System.

On behalf of the Executive Director and staff of the RSS Headquarters, I wish to extend to his family and friends our sincerest condolences.  May he rest in peace and may the precious memories of him provide comfort at this time.

In conclusion, I say in Latin: IN PARADISUM, CHORUS ANGELORUM – which translated is “May the Angels lead you into paradise: may the martyrs receive you at your coming, and lead you into the holy city, Jerusalem. May the choir of Angels receive you, and with Lazarus, who once was poor, may you have everlasting rest.”

Goodbye my brother, goodbye from this mortal life.